When I said I was in need of a break I didn't mean a bone!

Unfortunately a couple of days into my second week in Mauritius I broke my right leg kite surfing. I had said in my previous post that I was "much in need of a break": was this the god of grammar getting back at me or something?! 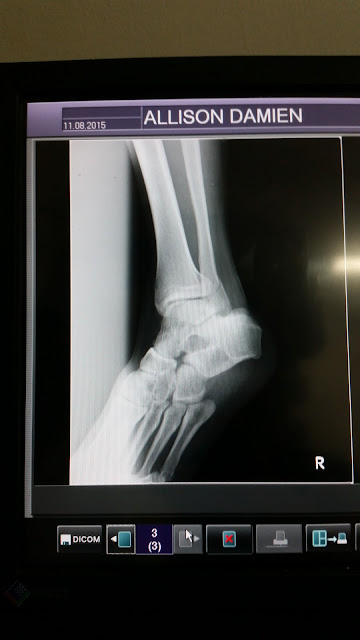 The problem was that as you can kind of see the bones weren't really lined up so I needed surgery. I realise that for many people surgery is just another hobby, especially if you are seeking the costly help of 'plastic' surgeons.

For me the experience was that I was alone in a fairly stressful hospital situation (we aren't talking about the UK here) and some fairly questionable bed side manners.

"Don't worry, you aren't leaving anyone behind so it doesn't matter if something happens" - says the nurse....

Unfortunately the surgery took longer than expected and the effects of the (insert name of drug related to morphine) were quite severe. I am still not sure if I hallucinated waking up with no underwear. I asked the nurses later but no-one had any idea what I was talking about. I also picked up some good bruises it seems, again no idea why and no information to explain it.

Other things I still don't know include how much the operation cost as I was anaesthetised before the surgeon arrived; I assume my insurance company knows :-/ I am always concerned about the way these kinds of companies write blank cheques as I have had a number of bad experiences with insurance companies trying to recover loses in the past.

The extreme beauty of Mauritius and the kind nature of the locals go a long way to making you feel better but this is still a pain; just about two thirds of my stay I was about to spend on crutches but it was about to get a little worse!

Post operation I had four days in hospital being prodded in what I assume were the normal ways. The private hospitals here are allegedly far better than the public ones and certainly mine had a sea view and beach front balcony! 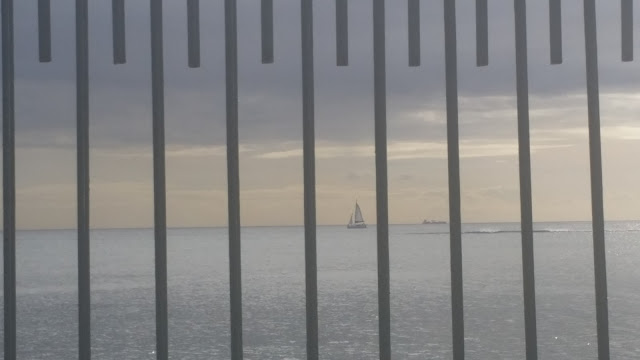 As a western visitor it is easy to appreciate the huge difference in experience, with a minimum wage of around $0.50USD per hour it is easy to see why. I heard many stories from nurses in the hospital of their, often very different experience of accidents. The same theme kept coming up, families would take people out of hospital as soon as they were allowed to in many cases. Healthcare is expensive and seems to be charged by the hour.

After leaving the hospital I had a very high fever, I think caused by a stomach bug. After 9 days on a mix of Oroken, Voltarene and Rabezol I just couldn't take normal food. My fever went over 38,5'C and I nearly went back to hospital. I decided on the great advice of a friend to move to a spa resort where at the very least I could get room service and basic food that would hopefully not bother my stomach so much.

The staff at the Hilton Mauritius were really some of the best I have ever stayed with, I would like to say a special thanks to Shyma for keeping an eye on me! It was money very well spent indeed and I was soon feeling nearly normal again. Normal that is for someone with a broken leg and the associated issues.

With two days to go I am now really looking forward to being back in the UK. I can't think of anywhere else in the world I would rather call home.

The usual question I am asked is 'how long will it take to heal' and the best guess I have heard so far is 12 week if the bone sets correctly, during which time I can't put any weight on the foot. After that there is more surgery to remove the hardware, then another 4-6 weeks for the bone to heal from all of the 5 holes in my fibia and tibia which will need to heal in order to strengthen the bone before I can carry out basic tasks like walking again. I'm guessing that 20 weeks means a lot of physiotherapy but I have no idea how much is offered on the NHS.

My final check up went well and I had the staples removed, 25 of them in the end! Removing the staples seemed to cause a bit of bleeding but that was all, there wasn't much pain at all thankfully. 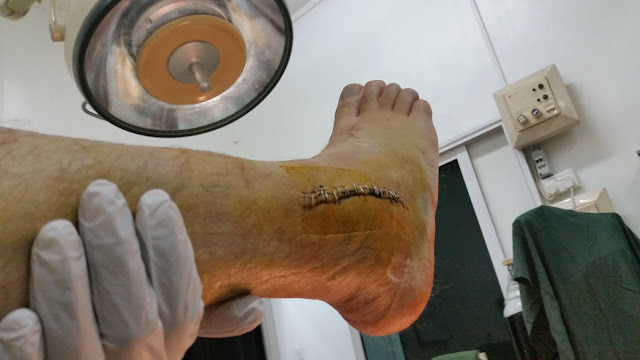