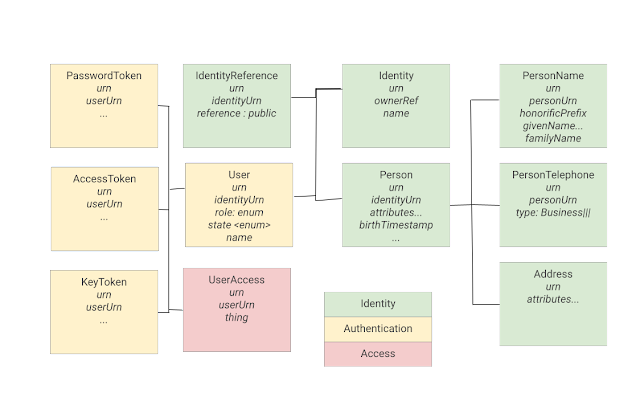 For some time I have been meaning to capture a snapshot of some of the key design considerations for the identity and account structure which emerged from quite a few years of requirements spanning Ad-tech, dating and multi account systems built across multiple startups.

The reasoning for sharing this model is in the hope that some of the lessons can be useful for others faced with similar challenges. If nothing else the model, as an emergent real world solution has some quirks not common in many or all public solutions in this space.

Requirements at scale of multiple companies

The model evolved over time and as such went through a number of iterations. There are a few quirks that warrant further attention. User access was one such quirt, arguably it should be associated with the identity rather than the user concept. It ended up living in user because at the time of creation, identity and access modules were in separate packages. Access should have been separated into another module.
Looking back another thing that seemed odd is that we didn't have even a group concept. The reason for this is that the 'thing' would often be a group. The access did have a collection of types of grant which were originally based on unix style read / write / x bits. These concepts expanded over time to contain about 7 different types of permission however they didn't explode out of control.
By Damien Allison at 17:47